The Wayne County prosecutor’s office said that on Feb. 26, 2021, Huron Township police were called to the Karvelis home near Judd and Gentz Roads at approximately 8 a.m., when an off- duty police officer neighbor saw the defendant and his father outside.

The defendant had a knife in his hand making stabbing motions at his father, authorities said.

The off-duty officer armed with his service weapon ordered the defendant to drop the weapon and to get down on the ground.

He secured the defendant until the Huron Township police arrived at 8:05 a.m. and arrested Kalin Karvelis. 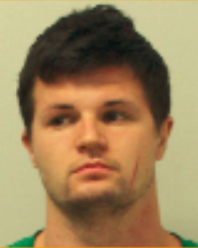 The officers entered the family home where they found Mrs. Karvelis in the front of the home suffering from a gunshot wound to the chest.

Medical assistance was rendered but she died from the gunshot wound.

Mr. Karvelis was shot in the neck and was taken to a local hospital for treatment and survived his injuries.

It is alleged that the defendant went over to his parents home and fatally shot his mother, shot his father, and tried to stab him with a knife.

He has been charged with first degree murder, assault with intent to murder and two counts of felony firearm.

Kalin Karvelis is expected to be arraigned today in the 34th District Court in Romulus.