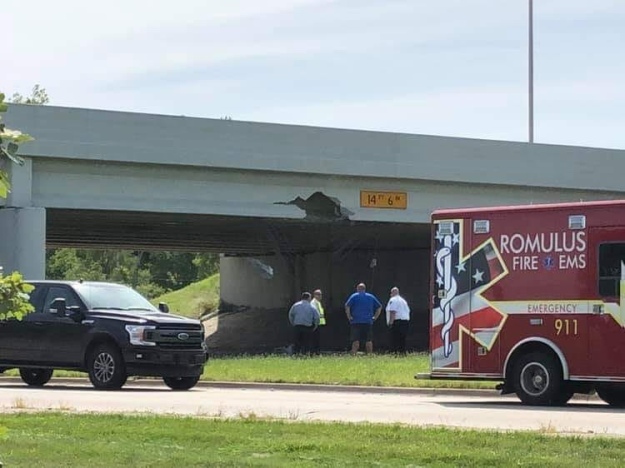 As of 2:15 p.m., Eastbound Eureka Road—between Wayne Road and Middlebelt Road—reopened. The Dingell Drive ramp to eastbound Eureka also reopened, following an accident on Friday. Crews worked around the clock to make repairs and remove debris from the roadways.

A driver was hospitalized Friday after the commerical vehicle they were driving struck the Dingell Drive overpass on Eureka Road in Romulus shortly before noon.

Falling debris from the collision with the bridge caused the driver’s injuries.

Traffic in the area is currently being rerouted.

The boom on the vehicle is what struck the overpass.

It was not properly stowed at the time of impact, the statement said.

The driver sustained injuries due to falling concrete.

He was transported to a local hospital for treatment.

Another person, who was injured in a nearby car, was treated at the scene and released.

“Contractors with the Wayne County Airport Authority are currently assessing the structural damage to the bridge. The roadways may be closed through the holiday weekend. Westbound Eureka Road is open,” the statement said.