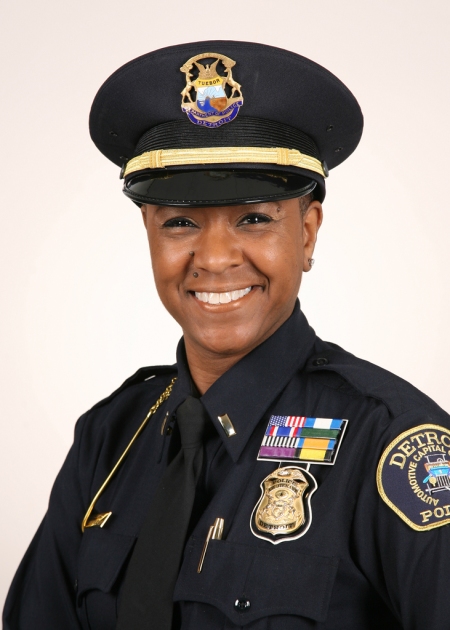 Lt. Shanda Starks of Detroit police was nominated female officer of the year, which will be announced April 4 during the department’s “Women in Blue” event at MGM Grand Detroit. Starks lives in New Boston and is a 22-year veteran with Detroit police. (Photo courtesy of Detroit Public Safety Foundation)

Lt. Shanda Starks of the Detroit Police Department has been nominated for female officer of the year after serving with the department for 22 years.

Starks, a New Boston resident, will be among a field of other candidates nominated, and the award will be announced during an April 4 event at MGM Grand Detroit called “Women in Blue.”

The award was created to recognize those who have distinguished service to the Detroit Police Department, the law enforcement profession, and the greater Detroit community, according to the Detroit Public Safety Foundation.

Nominations are open to female officers from the ranks of police officer to lieutenant.

During her career with Detroit police, Starks, 48, has worked in several different areas including internal affairs, recruiting, executive protection, and patrol operations as an officer and supervisor.

She has also worked many challenging investigations, including working in the sex crimes unit for nine years and most recently, in the child abuse unit for five years.

“Starks brings professionalism and a spirit of service to the victims of these horrific crimes and their families,” a statement from Detroit Public Safety said.

While overseeing the child abuse unit, Starks was able to build manpower and change the intake process to ensure complaints involving children were never missed.

“The oversight instituted by Lt. Starks ensures that every external complaint is investigated, and the proper notifications are made,” the statement said.

Starks was promoted recently to lieutenant and is currently assigned to communications.

She has a degree in public service administration and a master’s degree in organizational leadership, and was the first female to serve on the Detroit Police Department Honor Guard, serving from 2001-2008.

Starks stays active in the community when she’s not in uniform.

She volunteers at her church and speaks to children at inner city schools about child abuse and sex crimes, and also reads to children and encourages them to study and learn.

Starks has lived in New Boston since 2006 and is married to retired Wayne County Sheriffs Deputy Corporal Steven Starks.

Editor’s note: This article has been corrected on March 20, 2019 at 2:30 p.m. to reflect that Lt. Starks has been nominated for the award. An original posting incorrectly stated that Starks had already been awarded the title. The award will be announced April 4.