On Thursday, June 8, the Huron Township Police Department was recognized as the 2018 Outstanding Law Enforcement Agency by the Mothers Against Drunk Driving association (MADD).

Officer Thomas Smith was also nominated as an “Outstanding Officer” for his efforts to reduce or eliminate drunk and drugged driving.

The Huron Township Police Department as an agency received the 2017 State of Michigan award for being the state’s “Outstanding Law Enforcement Agency.” 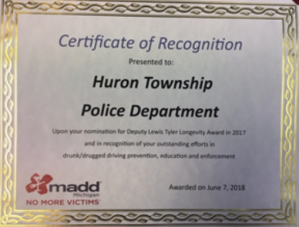 “I honestly believe that the proactive approach our department takes relating to traffic safety protects or even saves lives in our community. Statistically, 29 people die nationally every day at the hands of drunk or drugged drivers or 1 person every 15 minutes. We have seen first-hand in this community the effect an impaired driver can have on a family and how quickly a young life can be lost. Every impaired driver we get off the streets can potentially save a life. I am proud of our agency’s efforts,” said Huron Public Safety Director Everette Robbins.