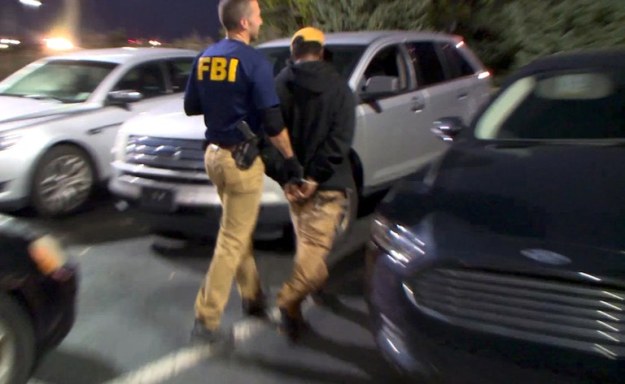 In Detroit, an FBI agent takes a suspected pimp into custody. (2016 Photo/FBI.gov)

During the crackdown spearheaded by the FBI, named Operation Cross Country XI, 12 children were rescued in Michigan.

Additionally, eight human traffickers were arrested and 46 adults were temporarily taken into custody in both the Detroit and Flint areas from Oct. 12-15.

Nationwide, 84 minors were rescued and 120 traffickers were arrested.

“Our agency is a proud partner of the FBI and their efforts to eradicate the exploitation of children through our involvement with the SEMTEC task force and further our participation in Operation Cross Country. As one of the nation’s preeminent task forces focused on human trafficking matters, it is clear each participating department is dedicated to the mission and to the victims of these heinous crimes. I am further grateful to many of the community groups and service providers which have aided in our fight and been there to meet so many of the needs of the children who have been taken advantage of,” said Everette Robbins, Huron Director of Public Safety.

Huron Township has a full time, grant-funded detective assigned to the task-force, as well as a part time member.

Robbins has been on the task-force for six years, and Detective Sterling Price for two years.

“This is unfortunately a problem that affects all of us whether we realize it or not. Many of these victims walk amongst us every day and we don’t even realize it. Every child rescued is given a chance for a better life. There is no better sense of accomplishment than our department being a small part of a great team responsible for making that happen for a child.”

From the archives: Huron Township Police join forces with FBI, other law enforcement agencies to clamp down on juvenile trafficking

This article has been updated