The 23000 block of Waterveiw in Huron Township.

According to Police Chief Everette Robbins, the Department of Public Works responded to the residence on Tuesday, July 15 on official business.

Upon arriving at the location, DPW workers noticed damage to the front door of the residence, promoting them to contact Huron PD.

The resident of the home revealed that they had been a victim of an armed home invasion in the early morning hours of July 13.

According to Robbins, the resident said that two males wearing masks forcefully entered the home with a handgun.

Robbins said the victim, who has a current medical marijuana license, was robbed of cash, jewelry and other electrical items.

Robbins said the victim did not initially report the crime. Police were first aware of the incident on July 15.

The first suspect that police are seeking is a white male, approximately 200 pounds and six feet-one inches tall, has dark eyes and a skinny bridge to his nose. This suspect carried a orange or pink stun gun.

Anyone who has further information regarding this incident should contact the Huron Township Police at 734-753-4400.

Back to Huron Hub 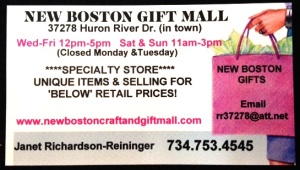